If you want to talk about trad jazz in BC, you need to talk about the Arntzens. Spanning three generations, this prolific musical family dazzles with melodic, swinging tunes rooted in the New Orleans tradition. Lloyd Arntzen is a jazz clarinetist, folk singer, and soprano saxophonist from Vancouver. Arntzen has been an active participant on the New Orleans jazz scene, forming the New Orleans North Traditional Jazz Band.

Leif Arntzen - trumpet
Leif Arntzen was born in Vancouver, and took up trumpet at age 8, with his father Lloyd being his first teacher. Lloyd introduced Leif to his favorite New Orleans jazz records, particularly Louis Armstrong. Leif’s early instructors included Ray Kirkum of the VSO & Donny Clark of Pacific Salt, Tom Periotte and Dave Robbins. Moving to New York in 1987, Leif studied with NYC’s top players & teachers, including William Vachianno, Jon Faddis, & Lew Soloff. Over his 45+ year career Leif has played trumpet throughout New York City’s top jazz & concert venues. His horn, voice, and original songs can be heard on more than 50 records, including 8 records as band leader & chief songwriter. He was a founding member of Sacred Hearts, a Vancouver indie-rock band he formed with his three brothers. Leif & his son Miles are founding members of Arntzen: Three Generations In Jazz, performing & recording with Leif’s father Lloyd & other family members in New York City & Vancouver since 2013. Leif continues to write songs & play trumpet in Greenwich Village NY where he & his wife Kathy have lived and raised their family since 1989.

Miles Francis Arntzen - drums
Miles Francis Arntzen is an artist from New York City whose first full-length album, Good Man, released on March 4, 2022 (under the stage name Miles Francis). The album - written and produced entirely by Arntzen in their one-person-band style, and released with an accompanying short film of the same name - explores masculinity, ego, and man's true nature. Arntzen has collaborated extensively with Antibalas (drummer and conductor, 2010-2016), Will Butler of Arcade Fire (drummer and co-producer, 2015-present), and EMEFE (bandleader, 2009-2016), plus Angelique Kidjo, Allen Toussaint, Sharon Jones and many more. You can learn more about their music at milesfrancis.com and follow them on social media at @instamiles! 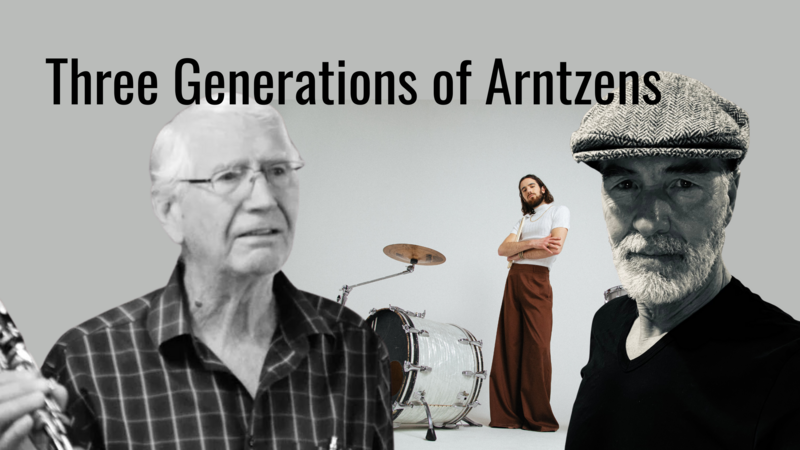