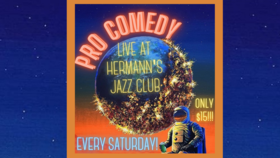 Theatre: Comedy
Robert Peng
Robert Peng is a Vancouver based comedian with a rapid fire joke style that will leave you laughing in awe.
After not be able to find an engineering job, Robert has channeled that powerful nerd energy into stand up comedy and now delivers gut punching humor that never misses. Robert made it all the way to the semi-finals at the Seattle International Comedy Competition and performs regularly at Yuk Yuk's, The House of Comedy and countless other comedy clubs.

Michelle Nnadi
MIchelle Nnadi is a comedian from Texas, currently blazing up the Vancouver comedy scene. Only a few years into the pro circuit, Mnadi comes through with energy of a seasoned veteran. Truly one of the sharpest young minds in the comedy scene, you won't want to miss this!

Drew Farrance
A Victoria legend in comedy clubs and the alleys behind them, Drew is one of the most naturally funny comedians working in Canada. A hilarious and opinionated corner stone of the Victoria comedy scene, he is also the co-host of the long running Phillip's Comedy night at The Mint. To witness this man child do live comedy is to experience pure bliss.