The closing event of Wonderment 2021 features an afternoon of classic ambient e...

The closing event of Wonderment 2021 features an afternoon of classic ambient electronic sounds from...

Longwalkshortdock essentially started the first time Dave King heard gritty electronic music in early eighties video games. Strongly influenced by these sounds and melodies, Dave started recording and looping segments as a child. He also got a taste for sampling and recording; taping segments of his piano practice to fool his parents into thinking he was practicing in the other room when he was really playing nintendo. Currently, a veteran of sound design and electronic music production for well over a decade, Longwalkshortdock's music has stepped into a genre of its own. While normally renown for wild multimedia live performances with influences from early 80s video game music, metal and rock music, found-sound and vintage analog synthesis; Dave debuted another side of his sound during an online pandemic broadcast: ambient music. This will be the in-person debut performance of Longwalkshortdock’s ambient repertoire.

Combining esoteric samples, liquid drones and psychic manipulation, her sets simultaneously nurture and fragment, taking the listener to other worlds, other dimensions, other times - past, present and future - from memories of our childhood to glimpses of our old age. If you find yourself anywhere near her sound system, we recommend you lie down.

Dub Gnostic's roots in ambient music extend back to early exposures to artists like Wendy Carlos, Tangerine Dream and Vangelis in his middle school years, and he was producing experimental electro-acoustic music and sound collage on a four-track porta studio by his late teens. With the advent of chillout rooms at early 90s raves, he found the means to elevate avant garde sounds to a broad audience, performing as The Alchemist and DJ Nobody in London, Toronto and Montreal. Moving west in 1997, he quickly became involved in the Victoria and Vancouver scenes, most notably as music curator for Neptune Soundbar. Dub Gnostic has released music on Woodwork Recordings and Mosaic Records UK, and is currently preparing an album for release in early 2022.

Banfield Park is located at 521 Craigflower Road, behind the Vic West Community Centre. It is on the #14 bus route and easily accessible from the Galloping Goose trail. There is a children's playground located in the park, and there are public washrooms in the Vic West Community Centre, immediately adjacent to the park. Please "pack-it-in / pack-it-out" if bringing food and drink to the park, and remember that there is no smoking in CRD parks. Please also respect physical distancing protocols. Hand sanitizer and masks will be available for those who need them.

The 6th Edition of Wonderment is presented by the Garden City Electronic Music Society (GCEMS) and supported by the Government of Canada, the Province of British Columbia, the BC Arts Council, the Capital Regional District, and the City of Victoria. Donations are greatly appreciated and can be made via http://www.gcems.ca (GCEMS is a CRA-registered charity). 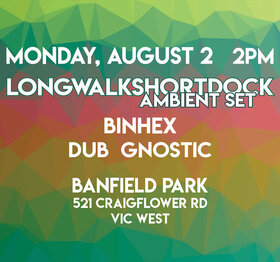