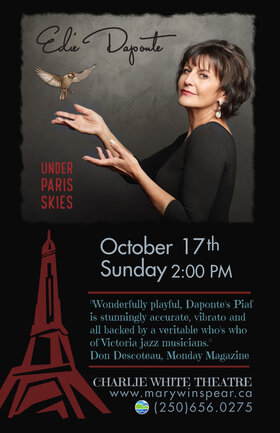 Music lovers will have the chance to see the incomparable Edie Daponte again as she performs her sell out show Under Paris Skies.
Edie returns to the Charlie White Theatre with another show and another language to add to her repertoire! Prepare to be transported into the world of the European music hall: with songs, live band, stories and entertainment. This time Edie will explore Edith Piaf and her contemporaries including the glamourous and unique Marlene Dietrich. Singing in English, French and German, she’ll bring you characterful versions of familiar and lesser-known numbers - all brought together with emotion, drama, sparkling costumes and Edie’s trademark humour.

Joining Edie are long-time collaborator Joey Smith on bass, and Vancouver Island favourites, Karel Roessingh on piano, Aaron Watson on accordion and guitar and Jonathan Eng on percussion. Share the intimate theatre atmosphere and enjoy Edie’s soulful and captivating renditions of the music inspired by the city of love.

"Wonderfully playful...DaPonte's Piaf is stunningly accurate, vibrato and all backed by a veritable who’s who of Victoria jazz musicians."
Don Descoteau, Monday Magazine

Anyone who has seen her perform will know that Edie Daponte brings the element of surprise to every show! Her range and repertoire travel far and wide crossing musical genres and spanning multiple decades and languages. She's equally at home in an intimate lounge setting or on an outdoor festival stage, having established a reputation in the music ... more info
Articles: Take a Trip to Paris
Videos:

*After touring for two and a half years with the Glenn Miller Orchestra as bassist and arranger, Joey Smith was married in Victoria and moved to Rochester, N.Y. to pursue graduate studies at the Eastman School of Music. For the past 18 years he has been bassist for many local groups and has collaborated with various artists during their stops in Vi... more info
Videos:

Karel Roessingh is a composer, arranger, producer and musician who has written scores for over five hundred television episodes, and many award-winning films, documentaries, and promotional videos.  He has recorded and produced more than sixteen of his own CDs, including several for the Canadian Naturescapes series distributed world-wide, two jazz... more info
Videos:

You Make Me Feel Like A Natural Woman - Cover by Maureen Wa...