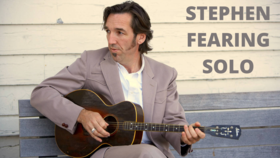 A towering legend in Canada’s music scene, Fearing is nationally recognized as a veteran solo Canadian artist/songwriter. Fans will know that he’s also a member of the Juno-award-winning roots-rock ensemble Blackie and the Rodeo Kings.

Other notable accomplishments include being named 2017 Contemporary Singer of the Year at the Canadian Folk Music Awards.His album Every Soul’s a Sailor was awarded the 2017 Worldwide Album of the Year by Blues & Roots Radio.

Stephen Fearing was born in 1963 in Vancouver, British Columbia and grew up in Dublin, Ireland where his schoolmates included future members of U2.

Audience members can expect a night of Fearing’s folk-rock originals, featuring him playing guitar, singing and storytelling. Fans of Hermann’s Jazz Club may have seen him gracing the stage in the past with Oliver Swain, Neil Osborne and Richard Moody.