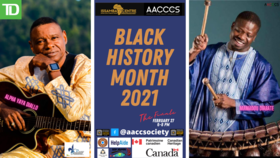 Music: Folk / Celtic / Latin / World Cultural / Heritage: Ethno-Cultural, History / Heritage
Issamba Music Showcase:
In celebration of the African Heritage/Black History Month enjoy ISSAMBA performances.
Happy closing of Black History Month 2021. If you loved our work and want to support here is the link: https://www.issambacentre.ca/donate
ENJOY!
- ALPHA YAYA DIALLO -- 6:00 - 6:45 PM
Guitarist and singer Alpha Yaya Diallo, from Guinea in West Africa, is one of the hottest acts on the world music scene. Now based in Canada, he’s earned a matchless reputation for the excellence of his musicianship and the excitement of his live shows – whether performing solo or with his band Bafing.bio_300 Diallo is a multi-talented artist. His dexterous acoustic and electric guitar-playing, with its fluid melodic lines and compelling grooves, places him in the front ranks of African axemen. In addition, he’s a skilled and experienced performer on a variety of percussion instruments, and on the balafon (traditional marimba). To cap it off, Diallo writes all his own compositions and sings with a supple, high, and beautifully modulated voice.
By successfully uniting the traditional and the contemporary in African music, Diallo has carved out a niche beside such luminaries as Salif Keita, Baaba Maal, Youssou N’Dour, and Mory Kante.
https://alphayayadiallo.com/
https://www.facebook.com/Alpha-Yaya-Diallo-Music-156152874406/
*******************
- MAMADOU DIABATE & Percussion Mania (trio) 7:00 - 7:45 PM
Mamadou Diabate was born into a traditional musician family (Sambla people) in Burkina Faso (West Africa), with a long tradition of practicing the profession of storytelling and music-making.
At the age of 5, he started his professional training with his father Penegue Diabate, who in his days was considered the best balafon player far beyond the borders of the sambla culture. At 8 he began his apprenticeship years with renowned balafonists of neighboring peoples.
In 1988 and 1998 he won the first prize of the "National Culture Week" of Burkina Faso.
He currently lives in Austria.
With his group Percussion Mania, he won the Austrian World Music Award (2011) and the Grand Prix of the "Triangle du Balafon" Competition in Mali (2012). For his virtuosity, he was also honored with the "Prix Alkaly Camara de la virtuosité".
In 2016 he was made Knight of the National Order (Chevalier de l'Ordre National) of Burkina Faso.
In 2019 he received the "Best International Artist" award of Burkina Faso.
Up to now (2019) he has released 13 CDs with his own compositions and 2 others with authentic music of the Sambla and Tusia peoples (both world premiere).
In Burkina Faso, he had built a primary school where poor children are taught free of charge. (www.sababu.info)
- https://www.facebook.com/Mamadou-Diabate-146279572097449
-https://www.mamadoudiabate.com/
ACKNOWLEDGEMENT
This celebration is made possible by the generous support of the Government @CdnHeritage, and sponsored by TD Bank Canada @TDCanada
Want to support our work? You can donate: https://www.issambacentre.ca/donate
Thank you!

Guitarist and singer Alpha Yaya Diallo, from Guinea in West Africa, is one of the hottest acts on the current world music scene. Now based in Vancouver, Canada, he's earned a matchless reputation internationally for the excellence of his musicianship and the excitement of his live shows - whether performing solo or with his band Bafing. Diallo is a... more info
Submit info on this show to our admins