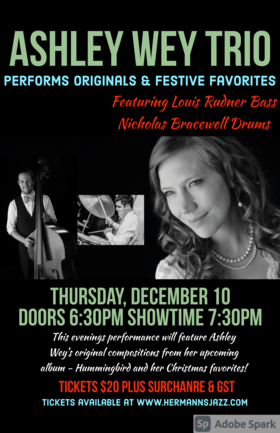 Music: Jazz / Blues
**Due to updates with BC COVID Regulations, we have had to move this show to live stream only. For those who have tickets, you have been contacted. If you were not, please contact us at [email protected] to sort out your refund. We are very saddened by this, and apologize for any inconvenience it may have caused. We thank you for your patience as we get everything sorted out.**

Ashley Wey is a multi award-winning Canadian singer-songwriter and pianist. She has worked with Canadian Idol winner Eva Avila, Juno Award-winners Brandi Distrehaft, Mae Moore, The Parachute Club and has toured on cruise ships around the world with four-time Grammy Award winner, Manny Kellough. With three critically acclaimed self-produced albums to her credit, Wey is due to release her first album of entirely original music, Hummingbird – a genre-bending project melding alternative folk, pop, and jazz on May 1, 2021.

Ashley lights up the stage with her bright smile, charming charisma, and magnificent sounds that open minds and reach hearts. Pianist, composer and singer Ashley Wey is a multi-faceted artist, who is highly regarded for both her playing and her writing as well as how she seamlessly crosses over from modern jazz to pop.

Ashley Wey met her bassist Louis Rudner while working on the high seas. They traveled the world together performing on cruise ships for three years before getting married and making Victoria their home together.

Louis Rudner is a diverse musician who has studied personally with many bass greats including Rodney Whitaker, Victoria Wooten, Oteil Burbridge, and Paul Keller. Louis is happy to relocate to Victoria and has been welcomed by many high caliber musicians on the west coast.

Once Nicholas Bracewell moved to the west coast the Ashley Wey trio began to breathe and embody the energy it was intended to have. Bracewell can authentically blend the breadth and depth of the sounds and energy they have been envisioning.

Anchored by audience interaction, diverse musicality, and candid authenticity, the Ashley Wey Trio has become beloved to fans around the world whenever they can be seen in performance. And while Ashley continues to earn respect in the Jazz world, her unique genre-bending sound is what sets her apart as she masterfully mixes jazz and pop, bringing virtuosity and unpredictability to songs that are concise and catchy.