Wonderment explores a new urban plaza environment, cutting across the downtempo spectrum from instrumental hip-hop to IDM to dub. West Bridge Plaza is the plateau area overlooking the inner harbour on the south side of the Johnson Street Bridge on the Songhees side of the Bridge.

Artists for this event are...

PSYCHIC POLLUTION
There’s a cold neu future brewing and its nostalgic gurgles can be heard in the records of the increasingly prolific Psychic Pollution. Psych heavy and Kraut in scope with sporadic kosmiche sampling that fits somewhere in the Berlin School of electronic music.
https://soundcloud.com/psychic-pollution/sets/memoirs-from-a-flat-planet

OKPK
Dan Godlovitch has been a major player in Victoria's bass and ambient scene for years, both as a producer/performer (OKPK, The Krells), and as a promoter with Urban Therapy and Pretty Good Not Bad. His music can be found on the Low Indigo imprint.
https://soundcloud.com/xlr8r/okpk-blacklight

JULES CHAZ
Jules Chaz pioneered the new-school approach of merging improvisational jazz with electronic music alongside Cobblestone Jazz's Danuel Tate around the turn of the millenium (back then, his principle vehicle for such explorations was the Victoria trio Eep Op Orp). He has since released on the Wagon Repair imprint and continues to make eclectic jazz-influenced electronic music, on his own, as part of the extended Cobblestone Jazz family, and with hip-hop artists such as Moka Only.
https://soundcloud.com/jules-chaz/soul-part-2

CASCADIA SOUND
Chris Rozek and DJ Dub Gnostic first met in the chill-out rooms of early 1990s Toronto raves. Both have been making electronic music since the mid-90s. Reunited in Victoria BC in 2009, they've been making music for the dance floor and chill-out room since 2010, merging the diverse influences from their youth - from Detroit to Berlin to Bristol - always with a dub flavour.
https://soundcloud.com/cascadiansound

JVZ
JVZ is an electronic music producer and pianist currently based in Victoria, who has been releasing music on Bandcamp since 2014. In near obscurity he has produced an impressive multi-genre body of work with a DIY aesthetic, using lo-fi sounds and legacy software, incorporating found sounds, field recordings and noise. Holding an undergrad degree in Music from Vancouver Island University, his work is informed by his studies of jazz theory and improvisation, and draws on themes of the natural world and the human condition.
https://jvzmusic.bandcamp.com/

This event is FREE and All-Ages. Bring sunscreen and water, and please be mindful that, although a more urban space than our usual Wonderment events, West Park Bridge is still considered a park in which CRD prohibitions on smoking and vaping apply. Please pack-it-in and pack-it-out, and if there's a bit of wind that day - make sure you've got a handle on your litter so it doesn't blow into the inner harbour.

Wonderment is supported by the BC Arts Council, the Capital Regional District, the City of Victoria, Long & McQuade, Modo Carshare Co-op, Metropol and Sunbelt Rentals.

electronic from Victoria BC
Available for Shows/Gigs

Dank Acid Techno from Victoria BC
Available for Shows/Gigs 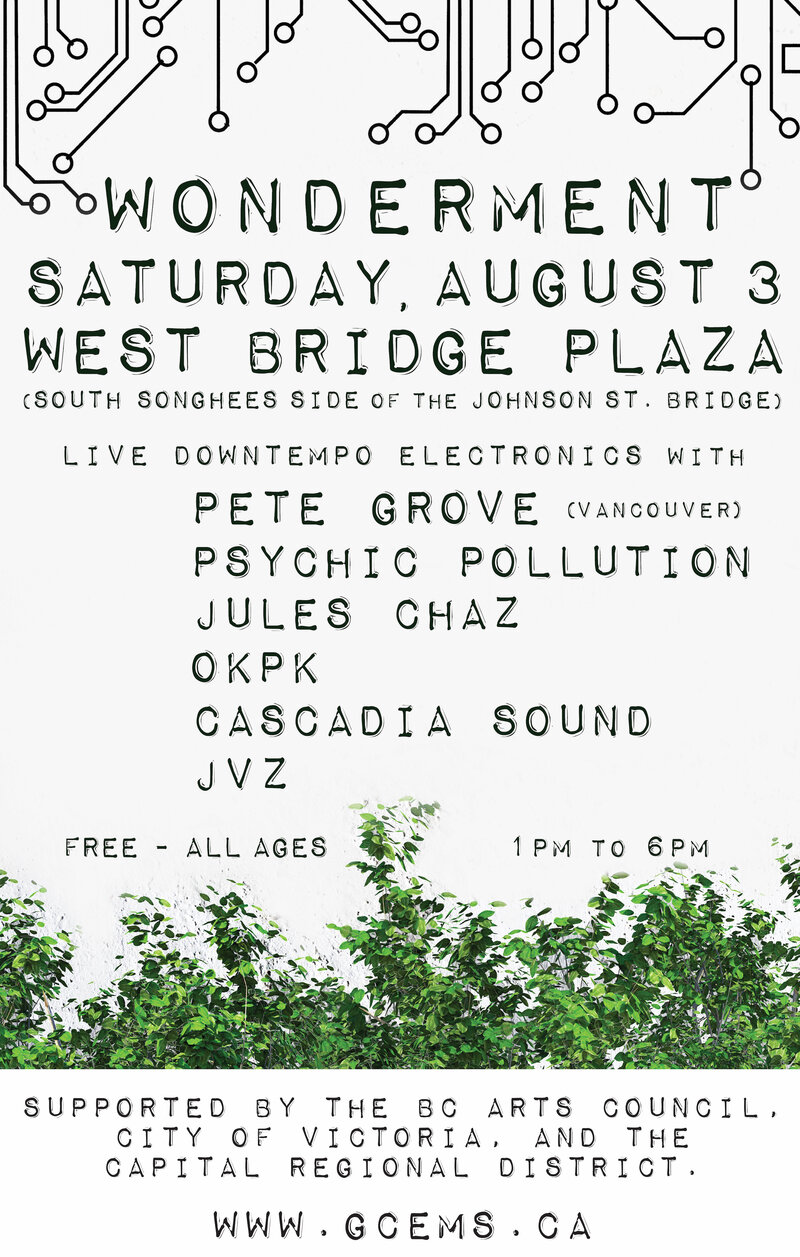