Bound By None CD Release Party!!!

Bound By None is a punk rock band from Vancouver, formed in 2006 and with roots in the 90s scene. Their music brings together elements as diverse as melodic hardcore, classic punk rock and even Ska, in the wake of influential bands the likes of NOFX, Good Riddance, Propagandhi or Pennywise, just to mention a few.
Their sound is direct, fast, aggressive and uncompromising

AK-747s
Weird death punks were formed in Vancouver in 2009. They play fast music. Topics include war, murder, betrayal, encouraged suicide, and a pretty butterfly. Night Party (2017) is AK-747s fourth release and second EP. We hope that it unnerves you. For peace, freedom, and democracy. Never again fascism. Millions of dead remind [us]. Inexplicably tied with Black Mountain and beating out Mother Mother in the 2011 WestEnder Best of Vancouver poll, AK-747s burns bridges and slaughters sacred cows. This isn't a fashion show.

Rebuild/Repair
Combining the raw energy of Black Flag with the crushing doom of Black Sabbath, Rebuild/Repair is Edmonton’s first and only “post-stoner skate-sludge” band. Part punk, part metal, all heart, these three Edmonton dudes accept all challenges, gigs, and beers thrown their way. Whether it's a pig roast or a punk club, R/R plays to win, everytime!

Their bio is too short these guys are incredible and you really need to show up early to this one because we aren't messing around with who is on this bill. Gonna be a rager.

Punk Rock from Vancouver BC
Available for Shows/Gigs 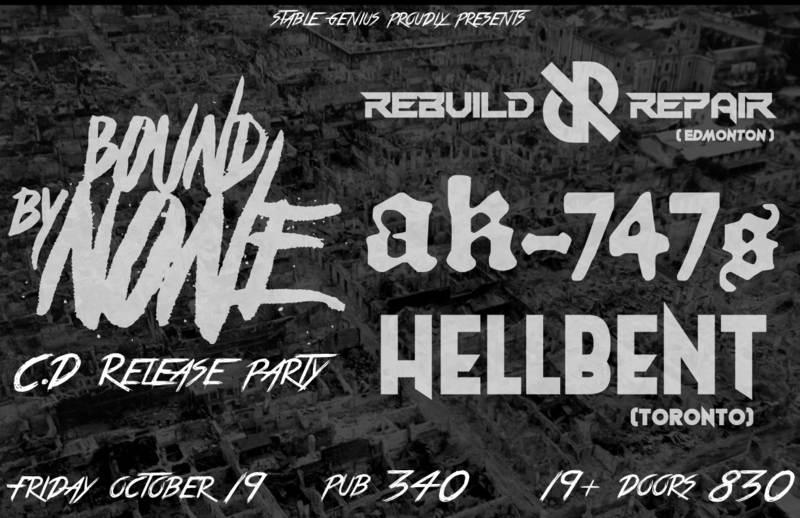