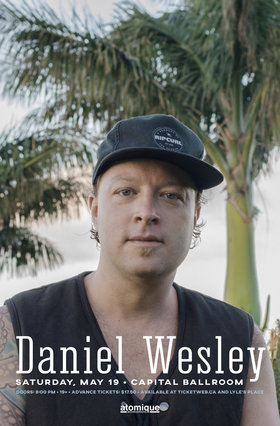 Music: Pop / Rock / Indie
If making music isn’t about having fun, what’s the point in doing it? That philosophy sums up Daniel Wesley’s new album, I Am Your Man, the 33-year-old Vancouver-based singer/songwriter’s seventh studio offering. As he nears the end of his career’s first decade, what comes across most vividly on the record – as longtime fans will surely note – is the balance Wesley has found in his life both on and off stage.

I Am Your Man is essentially Wesley returning to his natural strengths as a groove-based acoustic troubadour, following heavier electric experiments on his previous two records. Tracks such as “Beautiful” and “Shake” perfectly recapture the slow burning west coast feel that established Wesley’s reputation when he first arrived on the scene in the mid-2000s. Conversely, the lessons he’s learned along the way, and a willingness to apply them to his music, meant there was now unlimited potential in the studio.

“Usually my songs are just a reflection of where I’m at in my life,” Wesley says. “I was kind of open to new ideas and new opportunities, and I’m really proud of how these songs have come out.”

Part of his satisfaction with the results achieved on I Am Your Man was the decision to take extra time to allow the creative process to unfold. The album’s 10 tracks equally encompass two separate sessions that took place exactly a year apart. While there are subtle distinctions between these two batches of songs, the record’s overall consistency is a tribute to Wesley’s artistic maturity.

“I produced this album myself, the first time I’d done that since 2007,” he says. “I worked with a handful of producers on my last three records and those were great experiences, but I’d wrapped things up with my last label and it felt like the start of a new chapter, so I decided to do this one on my own. I had lots of time to flesh out the songs with the guys who have been playing with me for the past six years, so they had a good handle on where I was going.”

That trusted group of musicians includes Wesley’s longtime rhythm section of drummer Tim Proznick and bassist Darren Parris, along with saxophonist Alex Maher and keyboardist/guitarist Mike Kenney. Their shared chemistry is another big reason for I Am Your Man’s consistency, and why Wesley enjoyed making this album more than any other in his catalogue.

In the winter of 2008, for two night’s running, Daniel Wesley mounted the stage before a sold out crowd at Vancouver’s 1000 capacity Commodore Ballroom. The venerable concert hall has seen its share of local artists, but Wesley’s extraordinary two-night stand was something different; a grass roots event without precedent, based on the cycloni... more info

Charles Bukowksi said that “the history of melancholia includes all of us.” Man Made Lake is a band... true. But more importantly, they’re a family. Brothers coming together to make real music that speaks both to the “sudden painful joy” and that history Bukowski spoke of. Music that reaches into both mind and body to coax out some respon... more info
Submit info on this show to our admins