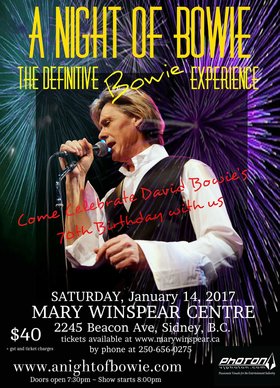 Music: Tribute / Cover
Victoria musician Syl Thompson and his band have been paying tribute to the musical works of David Bowie for more than three decades. Thompson embodies Bowie's exquisite style and persona and has been acclaimed as providing the most credible and realistic Bowie experience in North America.

January 2017 marks the first anniversary of David Bowie's death but rather than grieve, Thompson wants to bring people together to share the music and memories of this incredible singer, songwriter and actor. To commemorate the date, he and his band, Ground Control, will perform A Night of Bowie at the Mary Winspear Centre in Sidney.

This show is a multi-media extravaganza. Six highly respected musicians play each song as Bowie and his band performed them live and VJPhoton provides a visual experience second to none with photos and videos unique to each song. The look and feel of the concert replicates the Heathen Tour, complete with costume changes that include a famously familiar electric blue three-piece suit as well as a long and elegant crimson jacket. Music spans the broad spectrum of Bowie’s hits from 1969’s Space Oddity to 2013’s Where Are We Now? The show is eerily close to hearing and seeing Bowie himself.