EARLY SHOW Toronto's DIEMONDS, nominated for a 2016 Juno for their most recen...

Rock N Roll from Vancouver BC
Available for Shows/Gigs

from Victoria BC
Unknown

ROGUE PLANET is a concert promotion company that puts on sho...
Victoria BC
Open / Operational

Toronto's DIEMONDS, nominated for a 2016 Juno for their most recent album, play a sleazy hybrid of punk/metal/glam. Fronted by enigmatic female vocalist Priya Panda - this is sure to be a fun rawk-n-roll party.

For Pigeon Park, the release of their new single, ‘Sunlight Fading Away,’ represents a fresh start; an effort to chart a new course forward informed by their recent experiences on the road, and in the studio, with a track that showcases the band’s talents, individually and as a unit, in equal measure.

Scheduled for release on August 5th, 2016, ‘Sunlight Fading Away’ will surely solidify the Vancouver-based band’s well-earned reputation as one of Canada’s most dynamic, emerging modern rock acts.

Formed in 2008, Pigeon Park have made a name for themselves in nationwide based on their impeccable musicianship, high energy live shows and uniquely powerful sound; a seamless blend of classic and modern rock that’s constantly evolved over time.

Since, the band have released three EP’s, landed 2 Top 40 Rock Radio singles and toured extensively in Canada, playing their own shows and opening for high profile domestic and international artists including Aerosmith, Slash, Sam Roberts, Big Wreck, Scott Weiland and, in Spring 2016, The Offspring and Collective Soul.

In 2013, the band also took home the Platinum prize in one of Canada’s premier radio contests; the highly competitive 99.3 CFOX ‘Seeds’ competition – an honour previously bestowed on artists including Nickelback, Default and Matthew Good.

The win provide them an opportunity to record their 2015 EP, Stripes, with A-List producer, Garth Richardson (Rage Against The Machine, Red Hot Chili Peppers, Head of the Herd), who the band credit with helping them refine their songwriting efforts. “There was a lot to take away from the process with Garth,” says guitarist Logan Pacholok. “We learned how to make things stronger and stand out, which was huge.”

It’s clear the band – Nick Weber (vocals), Logan Pacholok (guitar/vocals), Kevin Okabe (guitar), Artur Lepert (bass) and new drummer, Spencer Burr – have put in their 10,000 hours and then some; constantly learning from their own shows and by watching every move the acts they’ve played with make on and off stage. And that dedication has paid off, resulting in a steadily growing fan base as well as popular and critical acclaim for their signature brand of high-octane modern rock.

Recording with Oorebeek (who produced the band’s 2013 sophomore EP, Black Widow), was like going home, Okabe says: “We grew up with Jordan. We’re extremely comfortable with him and so we were able to create something that’s more ‘us’ than anything we’ve done, and I think that comes across on ‘Sunlight Fading Away.’”

“When a song comes together so organically, that’s the best product we make,” Weber adds, “and Jordan really coaxes that out of us because he knows how we tick as human beings. It’s a great relationship.”

The strength of their relationships with each other – underpinned by mutual respect their skills as songwriters and performers, their longstanding friendship and musical common ground – have been integral to Pigeon Park’s longevity and success thus far, and that’s a product of their “bonding over South Park,’ pizza, jamming and smoking pot,” Weber says.

That, their dedication to expanding their individual and collective musical skills, and their mutual insistence on allowing each other to contribute and shine as individuals – on stage and on record – have been constants since the band first began playing together just out high school. But, over time, that ethic has also fuelled their songwriting process and their evolution from a blues-based, classic rock-influenced band to a modern rock powerhouse with a sound that’s all their own.

“We want everybody to put their stamp on a song because that’s what makes us who we are, “Weber says. “Letting each other breathe and have a good time with the song is really important and it’s something we’re all conscious of.”

When it comes to writing and recording serving the song is the band’s primary concern, but Pigeon Park’s approach to both the creative process and to dealing with the pressures of the music industry overall is highly collaborative.

If conflicts do arise – “And they will,” Weber says – “One of us will say, ‘All right, let’s get this on the table and get past it.’ Our purpose (as a band) is bigger than all of us and the fact we were friends for so long before the band really helps.”

While a song, in whole or in part, can come from anywhere and from any member of the band, typically Weber writes many of the band’s lyrics. ‘Sunlight Fading Away,’ however, was written almost entirely by Pacholok. “Logan’s very creative,” Weber says, “and when I looked at these lyrics I didn’t want to mess with them because I really liked the picture he was painting.”

For Pacholok, ‘Sunlight Fading Away’ was part of a process of rediscovering his desire to write music and to define where his strengths lie in terms of the band’s process and the overall musical spectrum they draw on for inspiration. “It’s actually, cryptically, about my frustrations with losing inspiration and I wrote the lyrics with that in mind,” he says.

That said, don’t let the name of the track fool you. ‘Sunlight Fading Away’ may detail the difficulties of expressing yourself, creatively and/or personally, but it represents a renewal of the band’s dedication to their craft and the path they’ve chosen going forward.

Bottom line, given their focus, unrelenting energy and highly developed chops, it’s clear that Pigeon Park’s own star is only beginning to shine.

Toronto is the setting for the most molten rock and metal scene in the western hemisphere. Meet Diemonds: the city’s hungriest band, clawing their way out of the underground with their modern day hard rock sound that draws inspiration from rock n’ roll’s heroes. Diemonds combine live theatrics and the antics of bands like Guns n’ Roses, Motley Crue, and Motorhead, with lyrics that speak to the outcasts, wild childs, and misfits. Then, they chew it up and spit it out in a way that only Diemonds can.

Never has the music world been so poised for a frontwoman like Priya Panda, a sultry singer who walks the indeterminable fine line between class and crass and breaks every cultural, social, gender and sexual boundary known to hard rock. If the ever growing legions of Die-Hards are any indication, Priya and the rest of her “Bad Pack” including C.C. Diemond and Daniel Dekay on guitar as well as Tyrone Buccione on bass and drummer Aiden Tranquada, are firmly carving their own path in music and hoards of rock fans are already along for the ride.

“Our fans have grown with us over the years, they’re a part of our gang and a part of our story. If you’ve ever felt out of place, you’re like family to us,” says guitar player C.C. Diemond.

Their full length record “The Bad Pack” has taken them on countless North American tours with notable stops at festivals like Heavy MTL, SXSW, Rocklahoma, Seattle Hempfest as well as support slots of legends like Slash, Steel Panther and HellYeah!

The meaningful connections Diemonds have made with fans around the world has been crucial to their success. Their highly coveted merchandise items are often sold out well in advance of their release and it’s the Diemonds fans that have inked the band’s logo on their skin, driven from miles around to see them and made them one of the first music acts in Canada to have a successful crowd funding campaign.

Their sophomore effort re-established the band’s raw sound and prowess with an onslaught of rock n roll anthems that scream good times. Diemonds is currently nominated for the 2016 JUNO Awards : Heavy Metal Album of the Year for their latest release “Never Wanna Die”.

Malahat is the loudest, heaviest, rock band to emerge out of Canada recently. A blast from the past with modern tastes, these young men infuse their influences from the 1930's to today. A Slamming unforgettable sound with a dark Grungey-Groovey edge, morphing through a wave of the deep southern Blues, in a Psychedelic Fusion. With powerful hybrid rock vocals, progressive and explosive drumming, 70's grooving bass, and the dirtiest slide guitar you will ever hear, Malahat will blow you away with their stage show, diversity and their original sound of pure face melting Rock n Roll. 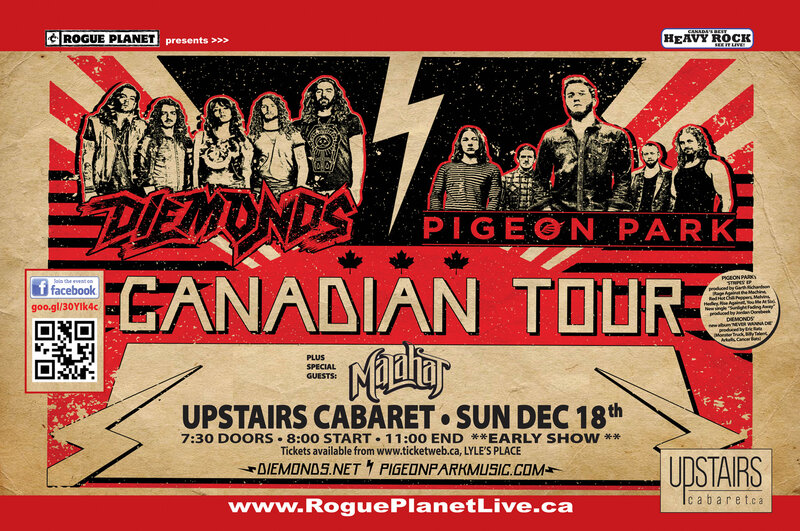