The last night of GCG 2016 is rooted in soul and latin grooves. Saturday October...

The last night of GCG 2016 is rooted in soul and latin grooves. Saturday October 1st begins with an early show at Upstairs Cabaret (7:00-10:00pm) with David Morin performing an opening set for Latin juggernaut TANGA. Anticipation will be high for both acts’ Victoria debuts, and a dance party is sure to ensue during Tanga’s lively set of cumbia, electro, Cuban and Caribbean rhythms.

TANGA: TANGA is a west coast world fusion mob, mixing up caribbean beats with east african
marimba, colombian electrocumbia and guatemalan dancehall.
Formed in 2007 by trumpeter Malcolm Aiken, Tanga emerged from a collective of musicians who cut their teeth playing the local latin scene while embracing jazz and pop music. Inspired by the dance grooves and percussion styles of latin heavies like Tito Puente, Machito and Mario Bauza, they released their first full-length album Simmer & Serve (2009).

 Havanaelectro was nominated for the 2014 Western Canadian Music Awards: World Recording TANGA
of the Year and the 2014 Canadian Folk Music Awards: World Group of the Year. Recent TANGA performances include the 2015 Vancouver Folk Music Festival and the Vancouver International Jazz Festival. The group is working on their third full-length album, highlighting sounds from their recent musical recording trip in Ecuador, South America.

David Morin: With his self released debut album, Every Colour, David Morin plays gigs around the world accompanied by a live band. Yet the humble neo-soul singer, songwriter and multi- instrumentalist still chooses to busk regularly on street corners in his hometown of Vancouver. After all, that's where this 32-year old, who is of Metis Native American descent, honed his craft– –and his social message.

Like the man himself, David Morin's music is pure, authentic and from the heart. Self-taught and passionately committed to being a career artist, he's blessed with the ability to turn strangers into fans. That's why he earned his stripes the hard way, busking on Vancouver streets and singing to make a living. This guitar (and loop-pedal) virtuoso makes a solo performance sound like an entire band.

"I do a lot of street performing," he says. "It's a good way for me to beef up my chops musically and try to get a crowd of people to listen when you're kind of subjecting them to performance. It's an interesting social experiment."
 
Morin's unique, feel-good fusion of soul, hip-hop and jazz has earned much critical acclaim. His ris bring to mind the licks of blues and funk masters. Playful hints of disco and pop add retro flavor to a contemporary pop aesthetic that's as accessible as it is seductive. And that voice! Melodic; smooth as honey; reminiscent in sound and vibe to the likes of D’Angelo and Musiq Soulchild. Okayplayer describes his debut album as “a brilliant blend of Motown melodics and loop-heavy hip-hop elements.” 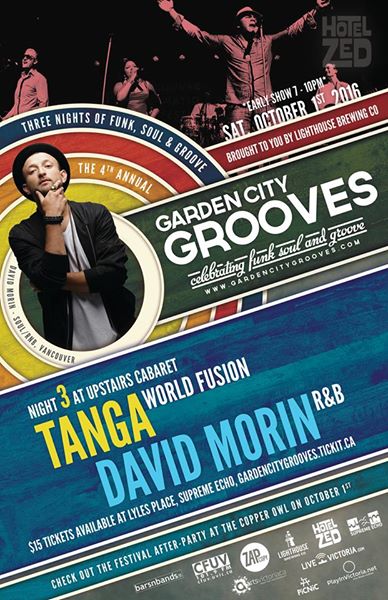