We're so excited to release our third album "Quiet Hum" with special guests The ...

Indie Roots from Victoria BC
Available for Shows/Gigs

We're so excited to release our third album "Quiet Hum" with special guests The Sweet Lowdown... And more!

Inspired by artists such as Owen Pallett, Joanna Newsom and the Punch Brothers, and forged from the same adventurous acoustic music scene on Vancouver Island that brought forth acts like Jenny Ritter, Outlaw Social, and Oliver Swain’s Big Machine, West My Friend delivers an immensely clever album of indie roots and chamber folk that contemplates the role of music and musicians in 2016.

It features pure and thrillingly elastic vocals from Eden Oliver; catchy arrangements of bass, mandolin, and accordion that draw from jazz, classical, folk and pop influences; and highly original lyrics that offer unique takes on art and life.

The plainspoken and somewhat tongue in cheek line, “I don’t want to write a song today,” kicks off the album’s opener, “No Good Monster,” a song about the inner critic, the paralysis that comes with perfectionism, and the inherent vulnerability involved in being an artist and putting your work out for the world to judge.

“How Could I Not Sing,” is a joyful, mandolin-driven waltz written and sung – and whistled! – by Alex Rempel, which was inspired by his pondering the role of artists in sociopolitical commentary. It’s deceptively simple lyric and ecstatic “Le de da” chorus make it the song listeners will most likely sing along to.

“Willows” is a wistful song Eden Oliver wrote about competition in the music business. It features a number of ghostly characters trying to create meaning in their lives while getting caught up in the game of attention seeking.

Other highlights of the album include “All Day Long,” a lovely, Irish-style arrangement of Halifax artist Zachary Gough’s song about work, purpose and capitalism; “The New World,” a song about colonialism from the perspective of colonisers, reflecting on their penchant for recasting history to position themselves as heroes; and “Tombée,” which features lyrics by Joanne Morency, the winner of the CBC’s French poetry prize.

The album was recorded at Fiddlehead Studios on Mayne Island – the sounds of tree frogs, ferry horns and horses occasionally making their way into the recording process. It was produced by Juno nominee David Travers-Smith.

Quiet Hum is the third outing from West My Friend since the band formed at the turn of the decade. Its 2012 debut, Place, garnered several nominations, including “Roots Album of the Year” and “Song of the Year,” at the Vancouver Island Music Awards. Its follow-up, 2014’s When The Ink Dries, was nominated for the Oliver Schroer “Pushing The Boundaries” Award at the Canadian Folk Music Awards and received the Readers’ Choice award for “Best New Sound of 2014” at Sleeping Bag Studios.

Band members Eden Oliver, Jeff Poynter and Alex Rempel all met while studying music at the University of Victoria and playing in different bands around town. They went through a near-Spinal-Tap-like process of finding a bass player – one became a coffee-roasting yogi; one left to become a police officer but is now doing education or something (nobody spontaneously combusted) – before finally connecting with Nick Mintenko, who studied jazz at the Royal Conservatory and performs with Marc Atkinson.

Together, with the release of Quiet Hum, the members of West My Friend build admirably on the body of work coming out of Victoria’s grassroots acoustic music scene. 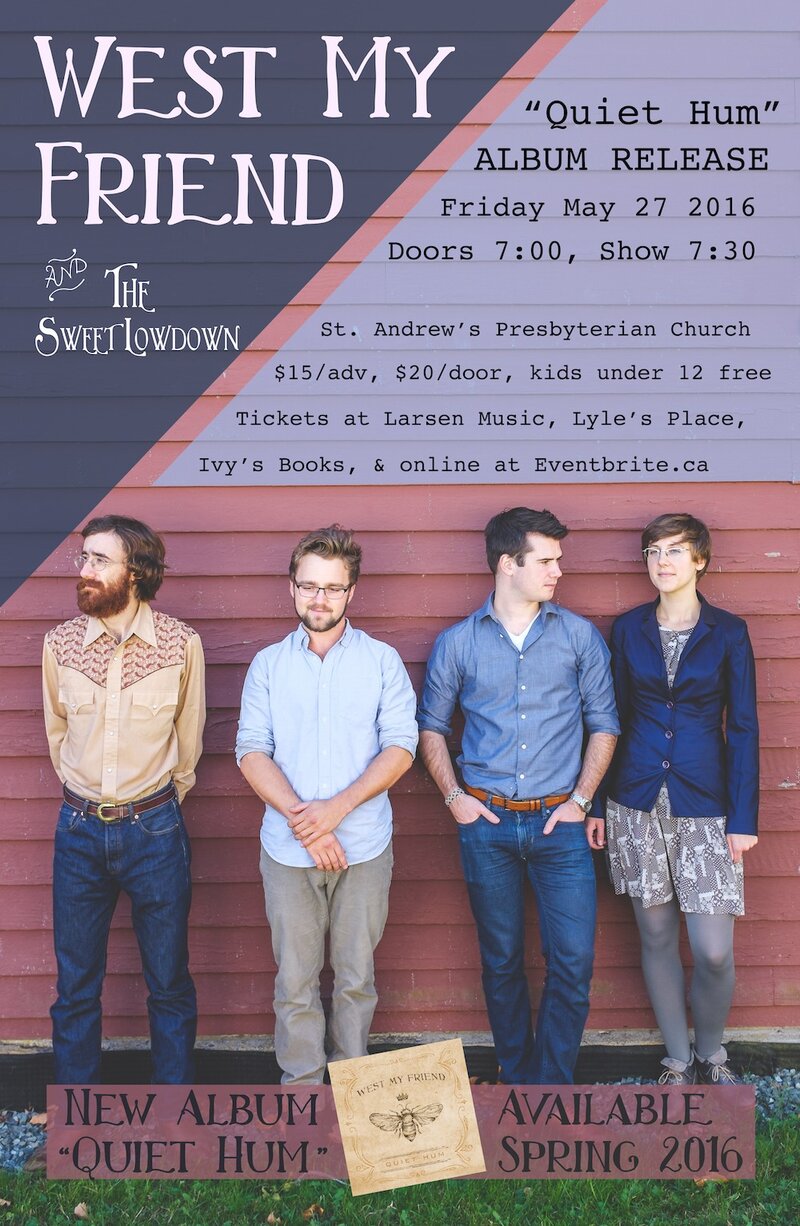