All Genres, All Venues, mainly leading touring acts. We are ...
Victoria BC
Open / Operational

The Great Detachment, Wintersleep’s sixth LP and first with Dine Alone Records, is very much an introspective work, both conceptually and thematically. Of course, it delivers a welcome dose of the atmospheric, entrancing alt-rock for which the band has become known – the beautifully orchestrated arrangements anchored by haunting, almost hypnotic vocal melodies; however, the way those arrangements were approached and the poetry they relay are very much the product of some self-(re)discovery.

“We were all pretty excited to get back to work,” he says, so in lieu of time off, they decided to write and demo new music at their own pace. After all, since their breakout success behind 2007’s Welcome To The Night Sky, downtime had almost become a dirty word. “So there was something very freeing and refreshing about slowing down and rediscovering things,” D’eon shares.

After writing a wealth of material in their Montreal studio, the band carefully curated the 11 songs comprising The Great Detachment and returned to Halifax’s Sonic Temple – the birthplace of Welcome To The Night Sky and its preceding 2003 self-titled and 2005 untitled efforts – with producer Tony Doogan (Belle & Sebastian, Mogwai).

The band recorded the majority of The Great Detachment live-off-the-floor, adding an organic and transparent aural aesthetic to the collection. “It’s a very different energy,” Murphy opines, “and one that we kind of missed.”

Tracks like “America” and “Freak Out” are propulsive rockers, showcasing crashing guitars and clever hooks ripe with the raw emotion of earlier hits like “Oblivion” and “Black Camera.” Conversely, “Metropolis” dances into darker territory, slightly more subdued to push focus towards the beautifully layered vocals while “Shadowless” reaches the furthest end of the spectrum, wrapping the listener in a warm sonic blanket of ambience and slow-building catharsis.

And matching its musical process, the lyrical thread sewn throughout The Great Detachment is one of introspection and identity; of reflection and contemplation.

The energy and urgency inherent in these songs makes them well-suited to the stage, adding more ammo to a captivating live show that’s already earned these JUNO winners tours of several continents; stages shared with Pearl Jam, Broken Social Scene, and The Hold Steady; a performance on Late Night with David Letterman; and even an opening slot for Sir Paul McCartney – hand-picked by the fab one himself.
Two years in the making, The Great Detachment marks a return to the organic approach of Wintersleep’s earlier works that simultaneously sees them reaching new pinnacles of songwriting and production. It captures their sonic essence, to be sure, but pushes it to a new plateau – proof that contemplation and introspection can actually lead you somewhere new. 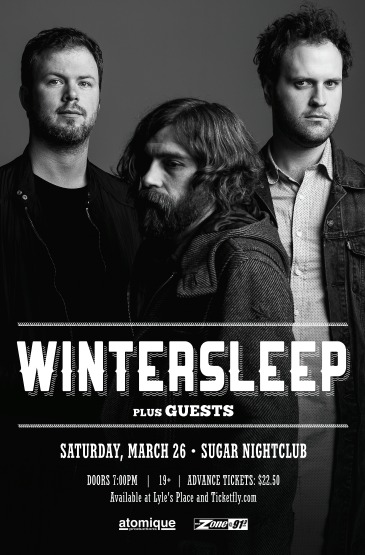