For one night only L.A.based touring act THE NEW DIVISION will be live at The Be...

The New Division (From L.A.)

For one night only L.A.based touring act THE NEW DIVISION will be live at The Belmont with local support from ACTORS and † BLACK MAGIQUE †

The New Division is an alias of the electronic artist John Glenn Kunkel. With 2 albums and 2 EP's under his belt, Kunkel returns in 2015 with Gemini, produced in collaboration with F.J. DeSanto from Hypefactor.

The third full length album can be branded as an ode to his signature sound, which has placed The New Division at the forefront of modern new wave music today. These 13 songs feature an eclectic mix of sonorous guitar hooks complemented by synth leads eerily narrating times past, all the while remaining boldly in the present.

ACTORS are a smooth night drive on a downtown viaduct; anesthetizing and brimming with kinetic energy. With warm keyboard pads and high frequency bass lines listeners fall in love immediately with a sound that’s both aggressive AND creamy. The new wave four piece achieves their end goal by paying tribute to the production and arrangement of Hughes-ian era heart melters and the kind of hymns found in those once-in-a-lifetime dreams.

They’ve created a soundtrack that could have only come from a city that’s constructed of hopeless glass towers and features an exquisite grey void that canopies overhead every day of the year. Actors make terrible musicians, but musicians often make fantastic ACTORS.

Get ready for a night of synth leads, guitar hooks and electronic BEATZ! 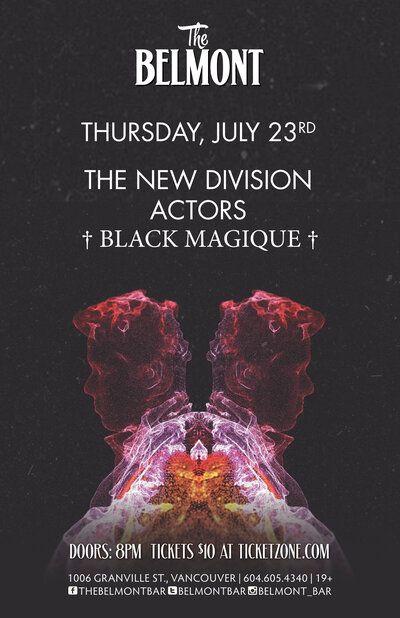