The Hindenburg Vancouver BC

VanMusic and Super Chido productions are glad to present one of the best ska ban...

The Hindenburg (No Minors)

VanMusic and Super Chido productions are glad to present one of the best ska bands in the world: The iconic New York group The Toasters at the newly renovated The Hindenburg on January 28th. With very special guests The Elixxxirs and Devil in the Wood Shack.

Now celebrating their 34th year the Toasters are once again announcing a full calendar of dates to kick off the 2015 touring campaign. Stopping in Vancouver on January 28th for an extended set at the Hindenburg. These NYC D.I.Y die-hards have already notched more than 5000 live shows and plan to heap more onto that tally this year with two North American tours, as well as dates in South America, Europe, South East Asia, Russia and points east. Thirty four years ago a bunch of upstarts ignited a spark on the Lower East Side of Manhattan. A spark that fired the imagination of the American music scene, causing a global conflagration. That music was Ska and the band was THE TOASTERS. The 2-Tone sound re-created in their own image by this unruly group of ruffians synthesized the classic 70’s British sound with east side Punk and rock and is now regarded as being the precursor to the Third Wave of Ska. The embers of the legacy bequeathed by The Specials, The Selecter, The Beat and Madness were rekindled and the Toasters hit the road. Hard. The band is currently supporting their latest single: “House of Soul”, released on their own label Megalith Records and released only in a 7 inch vinyl format.
www.toasters.org

The Elixxxirs is fixture of the Vancouver ska scene. Since their start in 2005, the band has developed far beyond its original ska/reggae format, serving up an original and infectious mix of pop, rock, and punk. The Elixxxirs are a fixture on Vancouver's live scene and they regularly tour Western Canada, building a reputation as capable hosts for the kind of night that shouldn't be followed by any concrete plans. The Elixxxirs have shared the stage with international bands including The Slackers and Neville Staples of The Specials and have joined forces with many Vancouver bands, including Los Furios, Brass Action and Sweet Leaf at Skaville Nov 28th.

Devil In The Wood Shack, based in Vancouver, BC, Canada, sounds like a child raised on punk rock that fell in love with camp fire stomp alongs and the darker side of western, gypsy blues. Raw and untamed; a sound straight from hell riding on drunken angel wings. Having shared a stage with Vic Ruggeiro of The Slackers, Big John Bates, Los furios, The Roper Show, and many other great acts, they're ready to melt the cold away this winter opening for The Toasters. 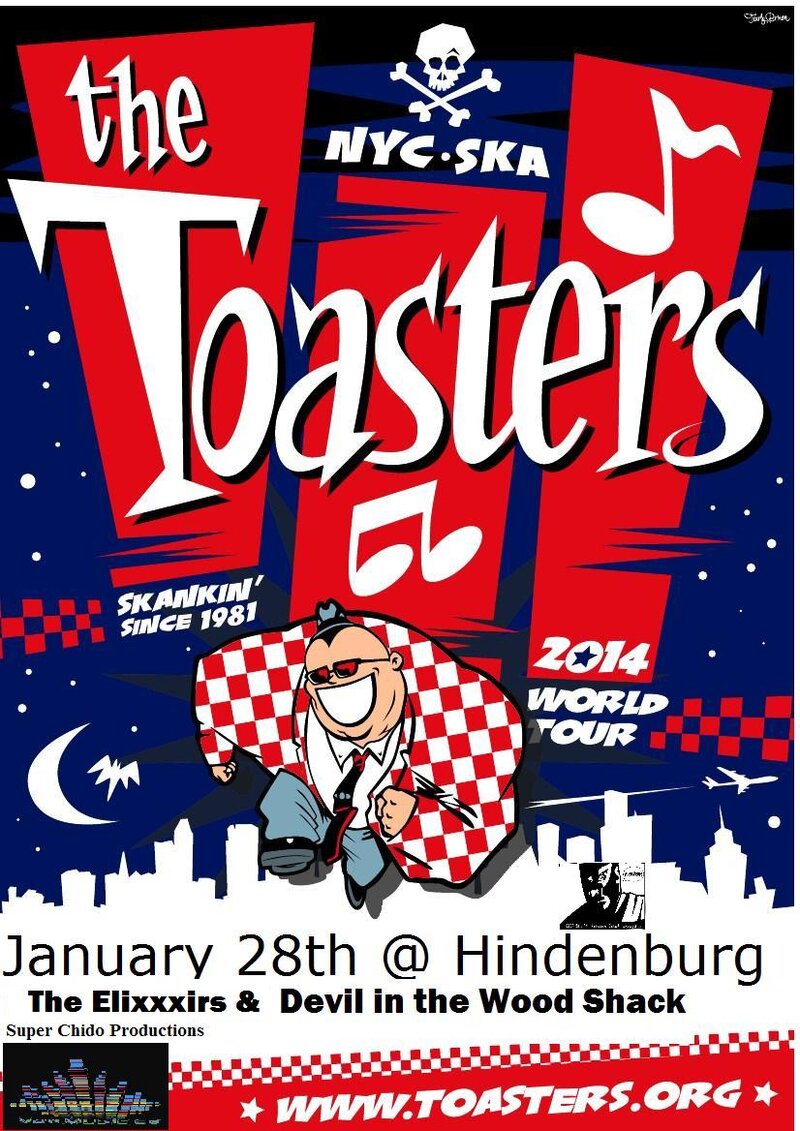