The Creepshow, The Phenomenauts, The Mants

The Creepshow, The Phenomenauts, The Mants

Garage Rock from Victoria BC
Available for Shows/Gigs

Friday April 11th The Creepshow hit The Tally Ho Sports Bar & Grill on their “Life After Death Tour” with The Phenomenauts, from California, in support of their new album “Science and Honor”. Joining them are Victoria's own theatrical garage rock trio The Mants. Tickets $15 on sale at Lyle's Place, Ditch Records, BC Smoke Shop & ticketweb.ca .

For the past 8 years The Creepshow have been smashing the whole world in the face with their brutaltastic mélange of punk, country, psychobilly and good old fashioned rock n’ roll. They’ve toured the world, sold a metric shit-ton of records and blown the faces off a ga-zillion fans…But the road to punkrock infamy hasn’t all been paved with rainbows, unicorns and gum drops. Over the years, the band has been fraught with innumerable hardships along the way. From robberies and wrecks to line-up changes and countless personal obstacles, this band has lived through it all. And you know what? Instead of crying in their beers and whining like assholes, they got more stronger, more awesomer, more determinated and a whole hell of a lot angrier.

Which brings us to the title… “Life After Death” is the fourth full-length from Canada’s reigning heavyweight champions of macabre, horror-soaked radness. Self-produced with the engineering magic of longtime friend Steve Rizun at Drive Studios (The Flatliners, Dillinger Four, Ill Scarlett, Protest The Hero etc), “Life After Death” is a sonic ear-gasm of debauched delights. Eleven venom-drenched bangers run the gamut of themes ranging from bloody revenge (duh) to unconventional love to the joys of cocktails to defiance in the face of insurmountable adversity and back again. This is the redefined, renewed, resurrected Creepshow at their very finest.

Praise from the press gallery:

“The album is nothing but good, rollicking, blood-soaked fun. Highly recommended.!” – All Music

“Most importantly, however, it finds them branching into new lyrical territory, resulting in a formidable pastiche of twang, balladry, fire and maturity beyond the genre's restricting horror-influenced slap-and-shuffle confines. “ – Exclaim

“The Creepshow have pushed the boundaries, which has worked in their favour and will keep fans listening to their music for years to come- just maybe not when the lights are off.” – The Examiner

“At this pointing in the game The Creepshow can do no wrong. They might not have the most original premise, but their growing thematic awareness and tight melodies make for one hell of a psychobilly romp with little to no equal. A must have for creeps and punks alike.” -PunkSite

The Phenomenauts perform a science-fiction inspired mix of punk rock, garage and new-wave. Combined with compelling antics and theatrics, the group’s message is a call to arms to defenders of science and honor across the galaxy, dealing with the serious implications of science fiction, science fact, and offering new perspectives on Earth life as we know it.
Conceived in the amazing year 2000, the group got early recognition as the East Bay’s craftiest and bravest band for their now infamous commando-style performances in which they would set up in front of large music venues such as the legendary Fillmore and perform rollicking sets powered by car batteries for unsuspecting crowds. These early “missions” landed them on the cover of multiple bay area publications, including The San Francisco Weekly, The East Bay Express and Independent Musician Magazine.
Now with three full lengths and countless USA and European tours under their tactical belts, the band’s success has steadily progressed to include music videos with over half a million views, commercial and college radio airplay (charting on the CMJ top 25), collaborations with NASA, and social activism through humorous shenanigans.
For The Phenomenauts, “Science And Honor” isn’t just a catchy slogan but a way of life. “We like having a good time,” said Commander Angel Nova, “But it is especially great when we can trick someone into learning something.”
A critical part of the Phenomenaut experience has always been their live show, during which the band proudly displays their ever-evolving arsenal of homemade “Phenoma-gadgets.” The Theramatic Helmerator, or “top of AR7-Bot’s head,” contains a wireless Theremin that creates Sci-Fi sounds reminiscent of old Star Trek episodes. The Streamerator, manned by Professor Greg Arius, blasts rolls of toilet paper out into the audience, bringing them in as part of the show. Clouds of CO2 envelop the crowd while rockets launch from the Rocketerator. Inflatable models of Earth even hover above the band as they play the crowd favorite “Earth is the Best” using vortex technology swiped from The Smithsonian. These cleverly crafted devices add to the mystique and cult appeal of the band and are just some of the gems one can expect in the live spectacle.
With a band name that means, “to pilot an unusual experience,” it’s no wonder they travel in a mode of transportation true to that description. They have customized their own fleet of Phenoma-vehicles bringing their space age image to the streets. Littered with electronic gadgets from the late 20th Century such as remote controls, stereo components, and motherboards of defunct computers, they are easily mistaken for pieces of electrical equipment turned inside out, and never fail to turn heads on the highway. Catching a glimpse of one of these ships is truly an unforgettable experience.
When they are not touring the galaxy, their ships dock at the top-secret Command Center, located in the industrial heart of Earth’s Capitol, West Oakland, CA. It is the center of The Phenomenauts’ universe and serves as home, rehearsal studio, and think tank for all things related to the band, as well as location of their infamous parties. The Command Center was featured on the Discovery Channel, a three-page spread in Fat Mike’s (NOFX) magazine Punk Rock Confidential, and appears in the independent feature film Punk Rock Holocaust.
The Phenomenauts were honored with a private tour of NASA’s Lyndon B. Johnson Space Center in Houston, which included meetings with astronauts, scientists, and hands-on experience with space station parts and training facilities. Believed to be the first punk song ever to be broadcasts from space, the single “Infinite Frontier” was played aboard the International Space Station as the first wake-up call of the STS-124 mission in 2008.
On May 21st, 2011,The Phenomenauts decided to prank the infamous Family Radio organization which predicted the “rapture” for May 21st. With a bus-full of fans, the band staged a rapture of their own in front of the Christian radio station’s headquarters by releasing a flock of helium filled blow-up dolls into the heavens (tied to fishing-wire to avoid littering the planet). The prank was covered on television news-programs world-wide by ABC, NBC, CBS, FOX, and got the band’s photo into 4,855 newspapers with help from the Associated Press and Reuters wire services. “We’re just poking fun at people who still believe in ‘bronze age’ fairy tales about floating people and stuff, and we’d like to gently convince them to believe in science,” explains Phenomenauts front-man, Commander Angel Nova. “In a super-modern age of satellites and cell phones and television, it’s kind of silly to be thinking of people floating away or sprouting wings.”
To date, The Phenomenauts have toured the world with the likes of The Slackers, Aquabats, Demented Are Go, The World/Inferno Friendship Society, The Briefs, The Toasters, The Epoxies, The Frustrators (Green Day side-project) and had their own “Space Station” stage for two years of the Vans Warped Tour. The band has trekked the states on numerous headlining tours with support from acts like The A.K.A.’s, Teenage Bottle Rocket and Kepi Ghoulie. Music videos have been featured on the front-page of YouTube and Myspace, along with television appearances on MTVu, G4 Tech TV, The Discovery Chanel, SyFy (Sci-Fi) Chanel and Cinimax.
Be prepared as The Phenomenauts help keep us focused and guide us through the turbulent waters of what the future might become. If we follow their lead, things might turn out alright.
http://www.silversprocket.net/progress/
https://www.facebook.com/pages/The-Phenomenauts

The Mants are a garage rock trio based in Victoria, BC Canada.
They perform in suits and rubber ant heads. The Mants play
hi-octane B-movie fueled schtick rawk that owes equally to The
Sonics, Billy Childish and pulp sci-fi novels from the 50's. 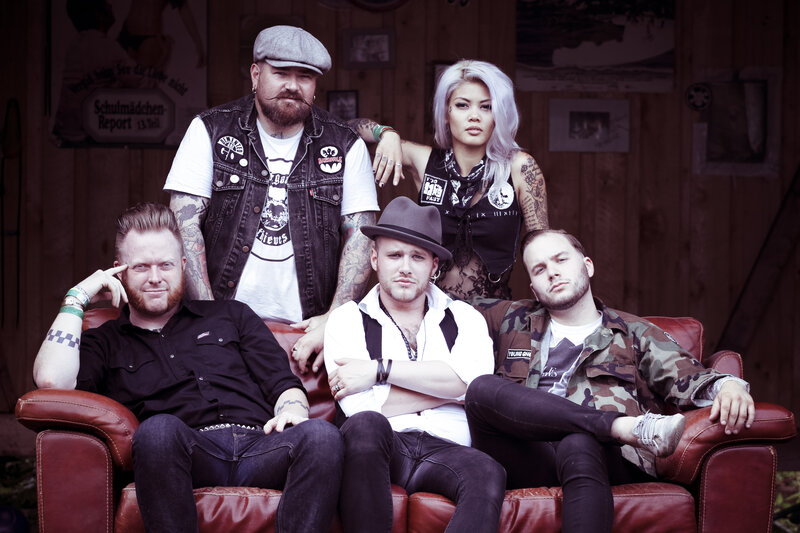