Science World, The PEAK Performance Project, The Peak 102.7, Music BC, and Nimbu...

Science World, The PEAK Performance Project, The Peak 102.7, Music BC, and Nimbus School of Recording Arts are proud to announce the lineup for the finale AMPED! Teen Band Night.

Dominique Fricot is the Peak Performance Project headliner for Saturday November 16th. He will play a full 45 minute set.

The top three bands, out of the thirteen that played Teen Band Nights 1 through 4, will be selected to return and play this finale opening for Dominique.
They will also get the opportunity to record a single at Nimbus School of Recording Arts.
The Top Three Bands will be announced here Sunday morning, November 10th.

Advance Tickets are available for $10

ALL AGES ARE WELCOME!


PLEASE NOTE: This is not a regular bar show, latecomers will not be admitted. Doors open at 6:30, close at 7:30pm, and the show will start shortly after 7:00 PM, Science World will not be taking late tickets. Think of this event as similar to a movie, don't be late!

After toiling in the trenches of the Vancouver music scene for the past decade, Dominique Fricot is finally starting to hit his stride. With his commanding stage presence, unrivaled songwriting skill and ear for creating pure pop masterpieces, Fricot owns the stage with his rich baritone and his emotive fusion of rock, soul, folk and jazz. Don’t believe me? Radio legend Alan Cross said that “if you like Chris Martin, then there’s no way you won’t like this Canadian”. Well known producer Jeff Dawson has called him “the new Neil Diamond”.

Since the release of If Baby Could Walk in June of 2012, Fricot has been making waves in not only British Columbia, but across Canada. The record’s lead single “Haunted by Love” was quickly picked up by Vancouver radio stations the Fox and the Peak, the latter adding the song into heavy rotation. Vancouver’s the Shore 104 was quick to follow suit when they selected the single for their September “Best of BC” contest, adding “Haunted by Love” to their own rotation and awarding Fricot with the $10,000 prize. Fricot went on to invest a portion of his grant money into a very striking music video for the single that was immediately endorsed by Alan Cross.

In the midst of all this good fortune, Fricot has maintained a steady work ethic, touring both Western and Eastern Canada in the spring and summer of 2012, with notable sold out release shows in Vancouver and Victoria. Fricot has also placed in the top 3 of the Peak Performance Project. To put more on his plate, Fricot also recently led an initiative with the Music Heals Charitable foundation, where he collaborated with several local businesses and schools across the lower BC to collect used iPods for music therapy programs.

Whatever you call him, the comparisons don’t do Dom justice. He’s a true original, a one of a kind talent, and a rapidly rising star. Don’t miss his unique blend of charm, stage domination, and relatable, heartfelt music as he continues to build his empire in 2013 and beyond.
http://dominiquefricot.com/
https://www.facebook.com/dominiquefricot?fref=ts

8:55 - 9:45 - The Dominique Fricot Performances will take place on the second floor in the Feature Gallery housing the music and technology themed exhibit AMPED. This gives young bands unable to play in most 19+ venues the chance to perform in front of a real audience, network with the established Vancouver music community, as well as receive professional audio and video recordings of each show. 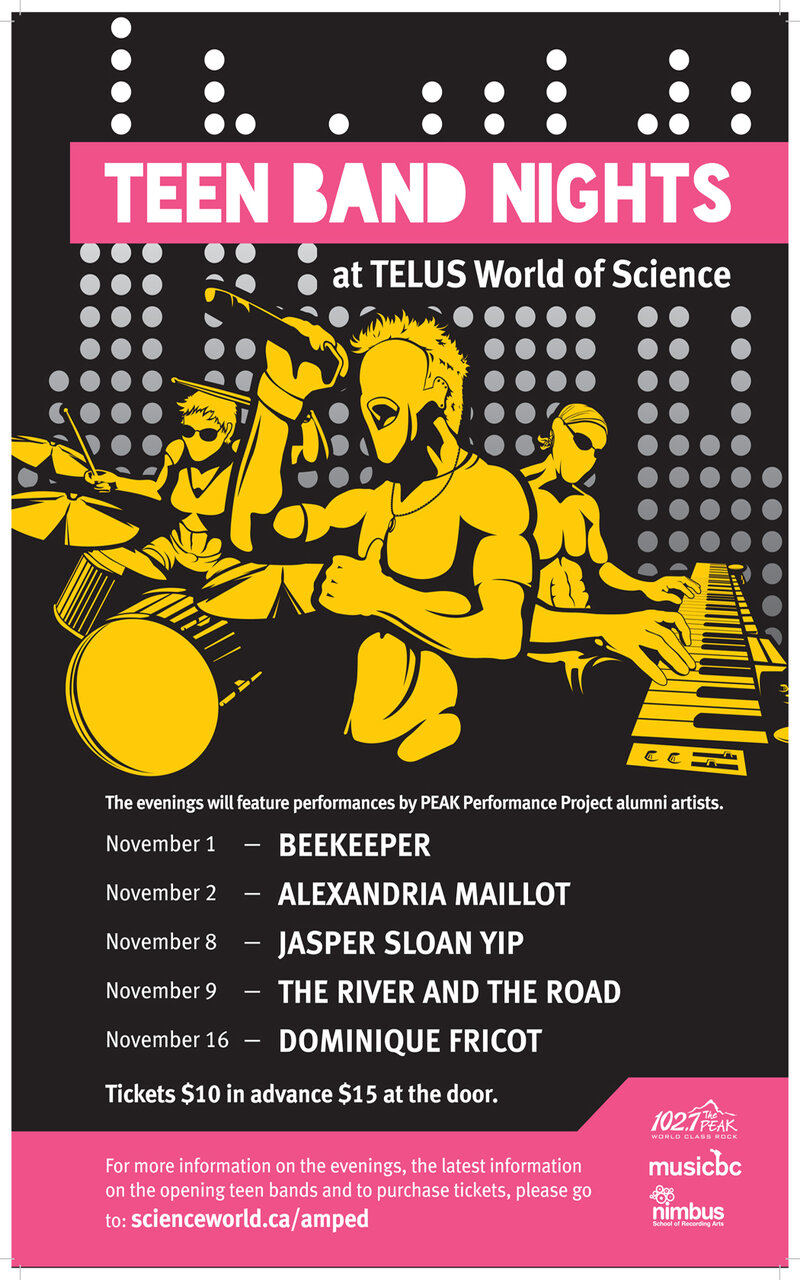