Now that everyone has recovered from their NYE hangovers, it's time to party aga...

Now that everyone has recovered from their NYE hangovers, it's time to party again!!! We're doing it big in 2013 and we're kicking it off with live hip hop at the ZOO!!

Stepping on stage at 5 feet 3 inches, female rapper Baby C is larger on the mic than she is in person. As an artist, writer, dancer and performer, Baby C is experiencing all angles of hip-hop. She can be compared to no other artist; her sexy style captures the attention of men and her lyrical content empowers women through an undeniably innovative flow. With an ability to make people dance to club tracks or vibe to slow jams, Baby C’s versatility has captured the attention of many fans. Her identifiable sound targets college students and thrives in the club scene.

Born in Vancouver, British Columbia, Baby C was influenced by various musical icons and started writing her own lyrics at the age of twelve. Her lyrics became a reflection of her life as her emotions were scribbled in ink. In 2000, she recorded her debut album in an underground studio and began to promote her own music. Breaking free of the stereotypical rap industry image, she let her music speak for itself.

Most people who hear Sarah K for the first time have a hard time believing that that voice comes out of her body. If you were to close your eyes, you would imagine a large buxom black woman in the glory days of Motown.
Lincoln Imagin-El (Soulfile)

Sarah K is a 26 year old R&B singer from North Vancouver, Canada. Sarah K would say that her most influential singer has always been Mariah Carey. Sarah appreciates many contemporary R&B artists such as Alicia Keys, Lauren Hill and Joss Stone, but also has her ear tuned to the greats like Aretha Franklin and Chaka Khan. All are important influences that help Sarah K shape her sound.

Presently Sarah K is continuing to write and perform non- stop. Her Deadmau5 inspired song "Hands Up!" has been getting radio play in the US, and in Europe on Top 40 stations, while her more flavourful R&B tracks hit there audiences from Louisiana to back here in Vancouver.

Sirreal is an original hip hop artist bringing hard hitting beats and lyrical talent to every performance. As an entertainer Sirreal knows how much hard work and dedication it takes to be one on Vancouver Islands' best. Born in Comox, BC and currently holding it down for Nanaimo, this hip hop phenomenon takes full advantage of today's technology wrangling his army of fans via internet, music videos, albums, concert promotions and constant hustle. Just like the music industry, the life of this rising star has not been easy. Devastated by the untimely death of both his father and older brother, Sirreal learned to stand as a man conquering his demons of addiction and poverty, and now instead of drugs Sirreal boldly laces his lyrics with the die hard truths of reality and its consequences whether they be positive or negative.
Sirreal's musical style bridges all genres of music by blending truthful hard-hitting lyrics with a live touring stage band by the name of Blue Satellite. A Perfect fit for any lineup, you may be surprised at what these guys can do.Sponsored by Nanaimo's very own Smoke Zone, D. Clarke Plumbing , Underground Skateboards and Beauty Queen Salon, Sirreal's reputation precedes him. He continues to shine with over 50 shows on Vancouver Island. Opening for such artists as Tech Nine, Royce Da 5"9, Bone Thugs N Harmony, B Real of Cypress Hill,Heavy Metal Kings (Vinny Paz and Ill Bill), Masta Ace, Bif Naked, The Beatnuts, Daniel Wesley, Moka Only, Danny Fernandez, Sweatshop Union and Juno award winning rap artist Belly, just to name a few. With great determination and gratitude, Sirreal's "Self Centred" album has been released independently and will be showcased on many upcoming shows and music videos in the next few months, with dates all across Vancouver Isle and the mainland. If you haven't heard him yet, now is your chance to give one of Vancouver Island's finest a listen. Having Recently linked up with his live band Blue Satellite ; Sirreal’s stage show has definitely taken it to another level. 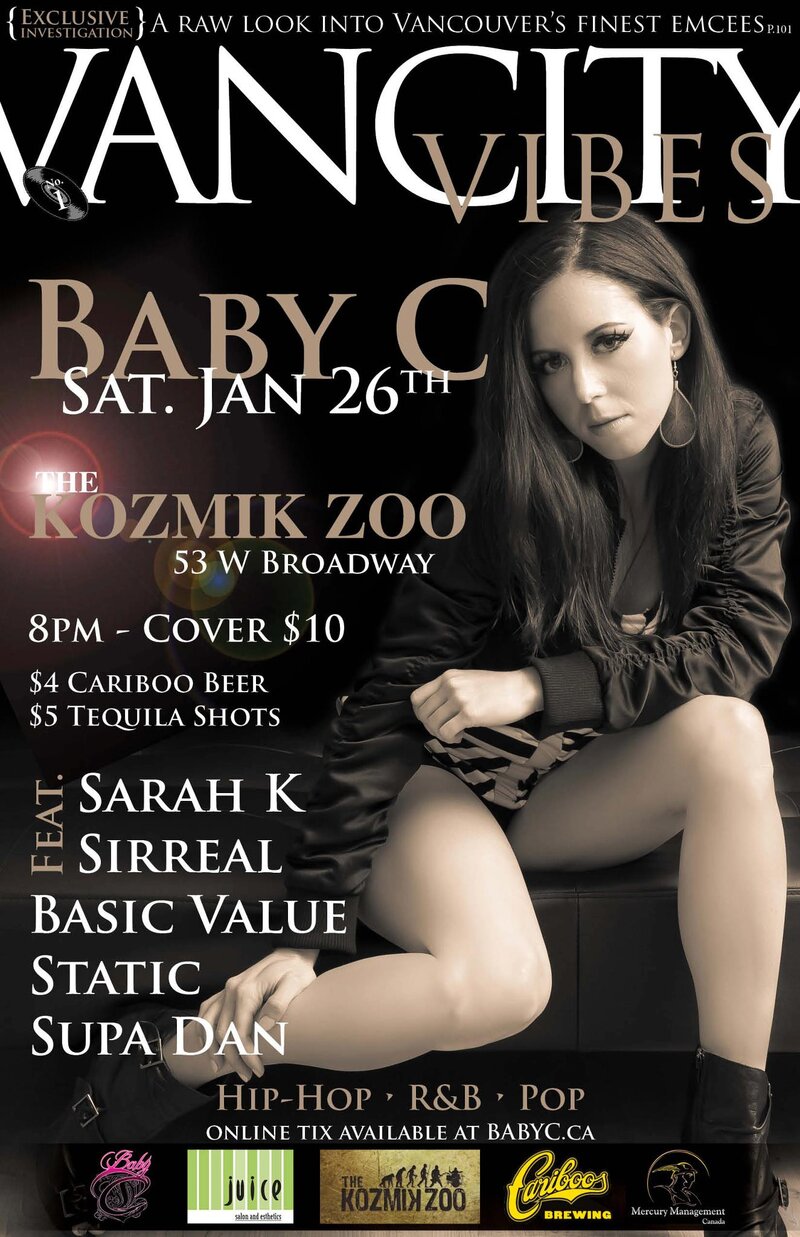