The Media Club Vancouver BC

Nimbus is proud to announce the upcoming finals for the Nimbus Recording Competi...

The Media Club (No Minors)

Rock N Roll from Vancouver BC
Available for Shows/Gigs

Nimbus is proud to announce the upcoming finals for the Nimbus Recording Competition, in which four bands will compete for the chance to record an EP with Nimbus producer Garth Richardson (Red Hot Chili Peppers, Rage Against the Machine, The Melvins, etc). Over 150 entries from BC and around the world were originally submitted into the competition and were judged by the Nimbus Business Class, who chose these top four final artists:

ALEXANDRIA MAILLOT was just recently one of the top 20 artists that participated in this year’s Peak Performance Project. A young but talented and experienced songwriter, Maillot already has one EP to her name called “Just Another Girl” and has been featured on MTV, Oprah’s website, and has played overseas as well as here in British Columbia with the likes of Hey Ocean and other popular local artists.
www.alexandriamaillot.com

PIGEON PARK came very close to making the top four in last year’s showcase competition, so it is fitting for them to have made it this year. They are a five-man rock group that has been a solid Vancouver establishment since their formation in 2008. Playing a high-energy brand of groove-infused, blues-influenced rock, Pigeon Park has completed two cross-country tours and released two albums, “The Sun” (2010) and a self-titled EP (2012).
www.pigeonparkmusic.com

HOOVES cites their superpowers as, “Formidable musical skills, a talent for troublemaking, and the ability to drink a bar dry in a single night, yet still provide a killer set.” Hailing from Washington State, this five-man rock group was formed in 2008, and have spent the time since developing their signature filthy, old-school rock n’ roll sound.
www.hoovesmusic.com

COBRA RAMONE- The lovechild of a barracuda and a wildebeest, the Vancouver power trio is named after their frontwoman, Cobra Ramone. Self-described as a Jack Daniel’s-soaked, scuzzy blues-rock band, their music is hard-rocking, catchy and gritty. They released a self-titled ten-track EP in April 2012.
www.cobraramone.com

Special Guests: IN CONTRA is a local experimental/post-rock group formed in 2004, and have been compared to the likes of Pink Floyd, Explosions in the Sky, and My Bloody Valentine. They will be taking the stage while the judges choose a winner from the contest finalists.
At the conclusion of in contra’s set, the final winner of the Nimbus Recording Competition will be announced.

Proceeds to go to the wonderful people at 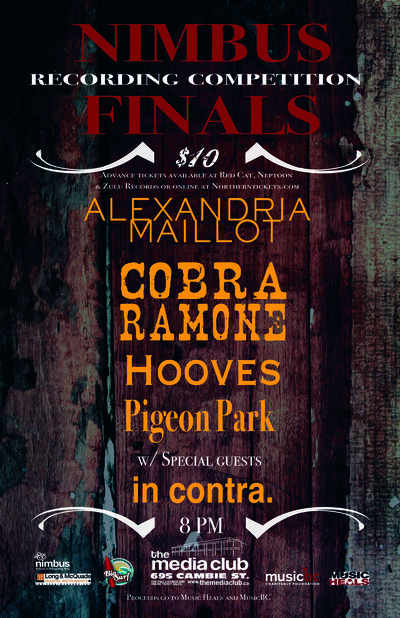