Heavy Soul from Vancouver BC
Available for Shows/Gigs

WHITEY - Delivering the goods in BC since February of 2001, Whitey has been charging dance floors and festivals across the country since 2005. With an EP, two full-lengths, and a documentary/live DVD in their library, this group from Chilliwack/Vancouver BC is well experienced. Their style, incorporating everything from Funk to Latin to Blues, offers something for everyone in an extremely energetic live show. http://www.myspace.com/whiteycanada

COCAINE MOUSTACHE - Showcasing a wide mixture of styles, Cocaine Moustache sounds like the dysfunctional love child of Black Sabbath and The Allman Brothers with a little ZZ Top and James Brown mixed in for the hell of it. Formed in 2009, the band features members from many of Vancouver's top local metal/punk outfits including Zuckuss, Mecha Messiah, Tyrants Blood, Tendonitis and Mechanism. http://www.myspace.com/CocaineMoustache

MONGOOSE - The Harbingers of East Van Rock n Roll! 4 hard working East Side lads coming together to create the brilliant, punk-infused, sonic assault known as Mongoose. Their contagious and raucous garage rock has had them hailed as "the best live band in Vancouver!" by Nerve Magazine. The Goose has rocked it with the likes of DOA and Clutch, Tricky Woo and Hedley while racking up nearly 100,000 km in a minivan called the EGG. These guys will lay the gift of rock on you with the same respect they show the gods of garage... The Goose will set you free! http://www.myspace.com/mongooserocks 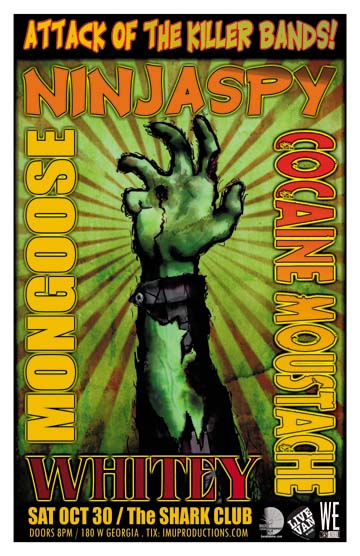