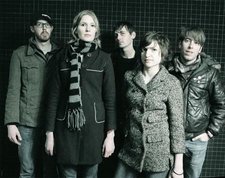 Dani Vachon
dani@whap.ca
604-326-6808
Contact Info
Past Shows (36)
With 2 lead female vocalists free of instruments and willing to shake their booty, and a bassist, guitarist and drummer who rock out just as hard, Cadeaux puts on a great live show. Full length album entitled Physical City released April 9th 2005 on Sound Document Recordings. This release was followed by a 22 day tour to Montreal and back. Upon their return, Cadeaux have spent their time writing new material for a supposed second release.
No audio samples have been linked to this profile.
View all tracks for this artist (1)

Status: Broken Up
Currently playing locally and out of town dates. - Last confirmed Jun. 3, 2006
Submit info on this band to our admins