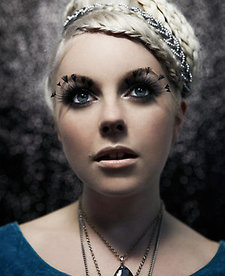 Victoria Christina Hesketh (born 4 May 1984), also known by her stage name/pseudonym Little Boots, is an English electropop singer–songwriter. As a musician Little Boots sings and plays the keyboard, piano, stylophone and a Japanese electronic instrument called Tenori-on.er new stage name was thought to be a nickname given to her from a friend who had seen the film Caligula (meaning "Little Boot" in Latin), although it was actually a reference to the fact that she was, for brief period the assistant manager at a small branch (about the size you would find located in a train station/airport) of Boots Group (a UK chemist chain) in her native Blackpool.Her debut album, Hands, released on the 8 June 2009, peaked at number five on the UK Albums Chart and at number twenty on the Irish Albums Chart. She has also released the EP Illuminations in the United States.

View all tracks for this artist (1)
No member roster has been entered (to link to musician profiles.)
Status: Unknown
- Last confirmed Jan. 19, 2010
Submit info on this band to our admins