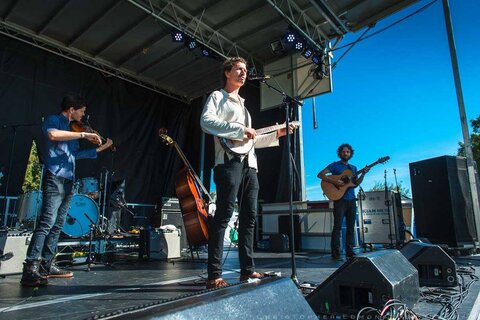 Oliver Swain
oliverswain76@gmail.com
250-858-8661
Contact Info
Past Shows (15)
Oliver Swain, a Juno and WCMA nominated Americana and Folk-Noir musician from Victoria BC spent a dozen years in some of North Americas most loved roots bands(Outlaw Social, The Duhks, The Bills) before releasing 'In a BIG MACHINE' in 2011 to rave reviews “Oliver Swain's brilliant vocals and genre-agnostic style make 'In a BIG MACHINE' one of the most exciting new releases on the Canadian folk scene in some time” - Lucinda Chodan, Editor, Edmonton Journal. 'In a BIG MACHINE' Charted in the top 40 in 2011 on Canadian Folk dj charts mostly due to a peak at #1 in Alberta and #3 in BC. A naturalist musician who was drawn to Louisiana and Appalachia several times to discover the roots of American music for himself, Oliver now resides in Victoria where frequent solo journeys into the rugged BC wilderness fuel his original take on songwriting and traditional playing and singing styles. Performing on Banjo and String Bass. Oliver's live show has attracted a lot of attention over the last year including that of Tamara Kater, Executive Director of Folk Music Canada “Since I first discovered him in 2008, Oliver Swain has been one of my very favorite artists – especially in a live setting. His performances are a musical journey that takes you from haunting old-time melodies to soaring new songs...sweeping vocal stylings, dazzling and dramatic skills as an instrumentalist, an evening spent with Oliver Swain will leave you breathless and joyful.”
No audio samples have been linked to this profile.

Status: Available for Shows/Gigs
- Last confirmed Jul. 7, 2020
Submit info on this band to our admins