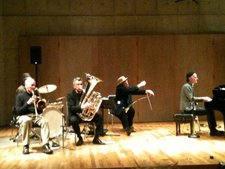 Stephen Brown and the Bastion Band

Stephen Brown
stephen@stephenbrown.ca
250-480-1133
Contact Info
Past Shows (217)
The band, a group of like minded, unamplified musicians, formed in 1982, perform traditional New Orleans jazz, roots country, blues, and R & B. Lyrical, bluesy, and unhurried, the Bastion Band treats fans to an evening of music rarely heard outside of the Crescent City. Featuring compositions of Jelly Roll Morton, WC Handy, Bessie Smith, and Louis Armstrong, plus roots country, folk, blues, and rock music from the golden era, the Bastion Band carries on a tradition that's been alive for over one hundred years. We play every Saturday evening, 8 - 11 pm, at the Ocean Island Backpackers Inn, Victoria, BC. We are a six piece band (God willing and the creeks don't rise) but our lineup changes every week. Most weeks the band is: Stephen Brown - piano, guitar, and vocals (me, I am there very week) and Denny Box - drums (almost always, however he does wander to Salt Spring Island or play with his percussion ensemble), Alf Sleigh - trombone (when he can make it from Vancouver), Aaron Watson - guitar, accordion, and saw (when he not playing another gig which is just about all of the time), and Alfons Fear - trumpet (when he is not wrapped up in his studies which is just about all of the time).

"Their ensemble (Bastion Band) is marvelous and achieved with very few obvious signals, as one would expect from a group that has been together for almost three decades." Deryk Barker, Music In Victoria

View all tracks for this artist (2)

Status: Available for Shows/Gigs
- Last confirmed Nov. 26, 2019
Submit info on this band to our admins