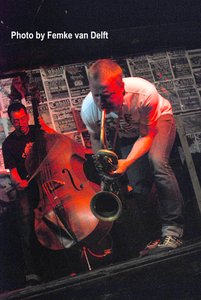 June 20- 29 2008
The Roundhouse Performance Centre
The Ironworks
(and The Cobalt, too)

Very early on in The Thing’s set at the Roundhouse Performance Center on Monday, saxophonist Mats Gustafsson, bassist Ingibrigt Haker Flaten, and drummer Paal Nilssen-Love took up a mournful dirge, quiet and melancholy, of a sort atypical of their playing. I read it as an expression of deep grief over the recent untimely death, on June 14th, of 44-year old Esbjörn Svensson, a virtuoso Swedish pianist whose trio had been scheduled to open for John Scofield at this very fest, but I may be wrong about that. The passage certainly spoke of loss, sorrow, and pain. What was particularly interesting was that clarinetist (at that moment, anyhow) Ken Vandermark kept up a screeching, overblown racket throughout, which I couldn’t but read as an existential statement, a metaphor of self-assertion: confronted with death and loss and pain and grief, of the ultimate uselessness of things - I will continue to make my noise, even louder if need be, to say “I am here, and I am alive, and THIS is how it feels.”

And then, of course, Mats joined in at full force, and the rest of the band as well. (Does anyone in the world blow louder than Mats Gustafsson? If I were to make a quaintly oldschool rock video of him, I’d have him battling a claymation brontosaurus in a roaring contest, and winning.) The combination of deeply-felt emotion and powerhouse playing achieved a level of meaning and gravity that most of the other performances simply didn’t have for me this year, reminding me that my favourite free jazz (be it late Coltrane, Albert Ayler, Don Cherry, or Peter Brotzmann) almost always has an emotive and existential dimension to it, as well as an aesthetic one. It’s got heart, guts, soul, balls, force, passion, courage. The Thing with Ken Vandermark, in grappling with life, death, and the human condition, made everyone else in the festival seem like they were playing mere music. You cannot sip tea to The Thing.

This is not to say that the rest of the festival didn’t have its fun bits. Jesse Zubot bowing the back of his violin at the Improv Power Play was a new one for me; I was happy that Mats picked him as Team Canada’s Most Valuable Player. Evan Parker doing a ten-minute (?) round of circular breathing when he played with Barry Guy, Paul Lytton, and pianist Agusti Fernandez before The Thing came on was pretty amazing, too, sounding like at least three separate sax players trapped in a phonebooth and making Francois Houle and Gustafsson’s ventures into circular breathing seem far humbler by contrast. Parker had been unusually subdued at different points this festival - even, I thought, slightly sentimental, when he played alongside Houle on opening night before the ebullient, energetic Atomic - so the feat was all the more impressive, and provoked a standing ovation. Percussionist Raymond Strid (Houle’s choice for Team Sweden’s MVP, whom I also greatly enjoyed) has a drum kit that comes with an immense bag of tricks - tops, cymbals, gongs, springs, metal bars, wooden blocks, mallets, and so forth, which he plunks onto this or that snare, rubbing or knocking them together, hitting, jangling, or vibrating them, or sawing at their edges with a drumstick. His manner is one of constant delight, as if he’s only just that second thought of what he’s doing and is as surprised and amused as we are by it; a huge, shambling, innocent-but-mischievous looking-man, I’m happy to hear he’ll be back with the rest of Team Sweden for the Time Flies festival (in February 2009) to continue the hockey match that we started. I never would have dreamed that our own “goalie,” the rather brooding, heavy-hitting Dylan van der Schyff, would be able to compete with someone so subtle, playful, and varied in his approach, but in fact he held his own on Sunday quite nicely - the second hugely pleasant surprise I’ve had from him since his smoking set with Nels Cline at the former Rime a couple o’ years ago.

What else? It was delightful to hear Ingibrigt Haker Flaten doing a Glenn Gould and humming along as he played with Vandermark in Free Fall; I love shit like that, when the players get so utterly lost and unselfconscious that the Holy Spirit enters into them. (Damn, the Holy Spirit needs singing lessons!) Fans of Mats Gustafsson’s baptism-of-fire electronica at the unofficial Fake Jazz event should shop around for Nash Kontroll, a noisy-as-fuck electronics project, featuring Mats on old school technology (“I use my laptop for email and for eBay,” he quips). My ears are still kind of sore from seeing him tonight. With Robots on Fire, afterwards, things were not so well-amplified, meaning I couldn’t hear drummer Kenton Loewen’s kit as clearly as I wanted, for one, but I still enjoyed myself immensely. This is the second time Robots Darren Williams, Dave Chokroun and Jonathan Wilke have gotten jazzfest heavy hitters to play with them (last year it was Eugene Chadbourne and Han Bennink). I’m all for making it a tradition.

Oh: I really dug what Fake Jazz co-organizer Bill did as Racketball, too - an opening set for drums, feedback, and distorted vocals. Music like this obviates the need for purgatives, enemas, or q-tips: what is inside will be out by the end.